Well when I saw the latest offering from Disney this year, I almost cried! Once again the most recent toy we spent a fortune on for our daughter has been blown out of the water by the Fisher-Price Dance Star Mickey.

For her birthday in August we got her the latest Elmo Live Encore, who she just adores, and who receives more than his fair share of love and attention. She gives him big kisses, complete with mmmmmmwah! sound effects, and cuddles with real feeling. She absolutely loves him.

Well Elmo was long forgotten when we braved the mall for our first Christmas shopping trip of the year. There, in all his display glory on the toy table (where Elmo used to bravely stand to face the hoards of adoring children poking at his body parts), was the Fisher-Price Dance Star Mickey. 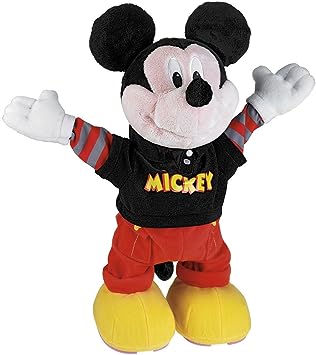 Now, if you or your child is a Mickey Mouse fan (like ours), this is the must have toy for the Christmas season. This toy is already selling out very quickly, so you will need to get in fast if you get the performance we did when your child sees him.

If your child is anything like ours, they will delight in the antics of the Fisher-Price Dance Star Mickey, which is causing as much of a stir as when the Elmo Live was first released. This robotic Mickey walks, talks, sings and dances to 6 different styles of music, including Latin, disco and techno. His humor and personality is something your child will recognize right away, and his dancing skills are entertaining as well as impressive.

Press his foot and Mickey also performs 6 different styles of dance. Pushing his foot again will make him cycle through all the different songs. You can be sure your children will actually get some exercise with the Dance Star Mickey, singing, dancing and playing interactive games. The song repetition stimulates memory also, and soon your child will be humming then singing along.

His moves are something that needs to be seen to be believed. He has small wheels under his feet which allow him to spin on the spot. His head bobs and his arms move up and down in true Mickey fashion. His mouth moves in perfect timing to his words. He Moonwalks and sings at the same time, something our daughter wanted to see over and over again. 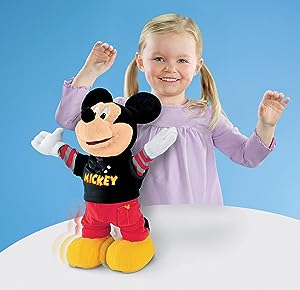 Like the Elmo Live Encore, this plush, robotic Mickey is incredibly flexible, allowing him to move very quickly, clapping his hands, raising his arms, and grooving to the beat of his Latin number. During his techno song, Mickey practically break dances, busting a move along with the best of them.

As well as the dancing and singing, there are 2 interactive games where your child can interact with Mickey. These games had the biggest impact on our daughter. She watched his mouth move intently during  ‘Mickey Says,’ where he invites everyone for a game of Simon Says. In ‘Freeze,’ she did her loony  jigging dance along with Mickey to the beat, then froze in place when Mickey said so.

Fisher-Price Dance Star Mickey stands at around 15” tall and weights around 4.5 pounds, so he may be a bit heavy for younger children to carry, older toddlers will have no problem however. He requires 6 AA batteries so it may be a good idea to invest in some rechargeable as well.

This toy is this year’s ‘must-have’ for Mickey Mouse fans, young and old. I went down to have look at him for a gift for my youngest niece, now I am probably going to get him for our daughter as well. If you are looking for something that will ‘knock their socks off’ (in Mickey’s own words), then the Fisher-Price Dance Star Mickey is for you.

View all posts by Amber →

Find Out the Best Sailing Knife

Hi, I’m Amber. Welcome to my blog! I love blogging about fitness, nutrition and my life in general. No topic is off limits. I’ve been married for over 6 years and I’m a mom of three kids. Check out my “About” page for more info on me and how this blog came to be. Thanks for stopping by!

Best Treadmills For Home Use 2021

Babywearing: Beyond the Cute Baby Carriers

10 Life Lessons From a Three-Year-Old

How You Can Stretch Your Budget When Times are Tight